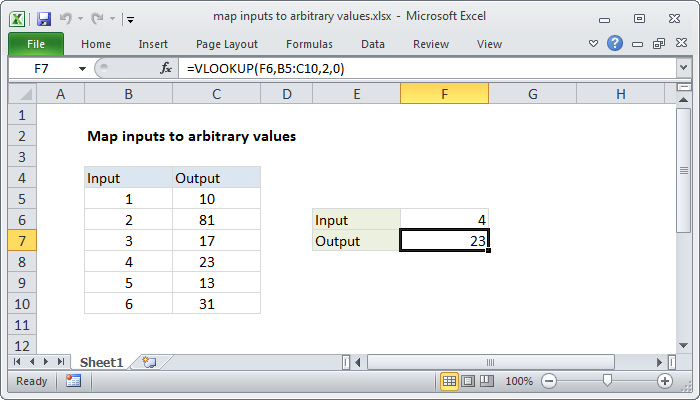 If you need to map or translate inputs to arbitrary values, you can use the VLOOKUP function.

In the example, we need to map the numbers 1-6 as follows:

Since there is no way to derive the output (i.e. it's arbitrary), we need to do some kind of lookup. The VLOOKUP function provides an easy way to do this.

In the example shown, the formula in F7 is:

This formula uses the value in cell F6 for a lookup value, the range B5:C10 for the lookup table, 2 to indicate "2nd column", and zero as the last argument to force an exact match.

Although in this case we are mapping numeric inputs to numeric outputs, the same formula will handle text values for both inputs and outputs.

If you have a limited number of inputs, and if the inputs are are numbers starting with 1, you can also use the CHOOSE function. For the example shown the equivalent formula based on CHOOSE is:

The choose function is unwieldy for large amounts of data but for smaller data sets that map to a 1-based index, it has the advantage of being an "all in one" solution.

VLOOKUP without #N/A error
To hide the #N/A error that VLOOKUP throws when it can't find a value, you can use the IFERROR function to catch the error and return any value you like. How the formula works When VLOOKUP can't find a value in a lookup table, it returns the #N/A...

Map text to numbers
To map or translate text inputs to arbitrary numeric values, you can use the VLOOKUP function with a simple table. In the example, we need to map five text values (statuses) to numeric status codes as follows: Status Code Started 10 Normal 20...
Related functions

The Excel CHOOSE function returns a value from a list using a given position or index. For example, CHOOSE(2,"red","blue","green") returns "blue", since blue is the 2nd value listed after the index number. The values provided to CHOOSE can...

How to use VLOOKUP for approximate matches
In this video, we look at how to configure VLOOKUP to look up values based on an approximate match. This is good for tax rates, postage, commissions, and the like.
See also
23 things you should know about VLOOKUP

Just a note to say your site is fantastic! I've learnt more on here in 3 hours than I have in nearly 3 decades of using Excel. Keep up the great work! -Mark