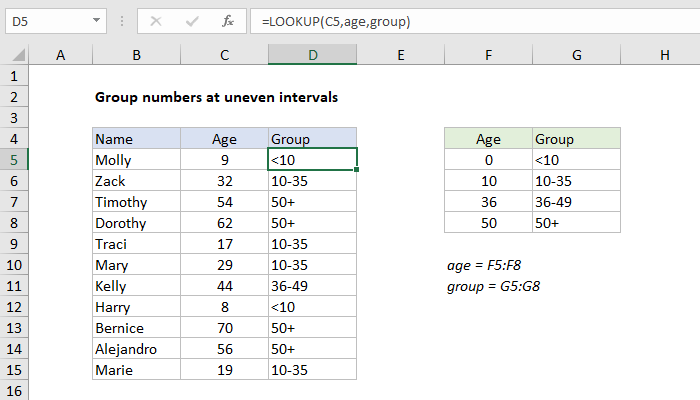 To do this, LOOKUP is configured as follows:

With this setup, LOOKUP performs an approximate match on the numeric values in column F, and returns the associated value from column G.

The LOOKUP function always performs an approximate match, with the following behavior:

Note: ages must appear in ascending order. Double-check custom intervals - it's easy to make a mistake :)

If you want to do this kind of grouping without a table on the worksheet, you can hardcode values into LOOKUP as array constants like this:

Group arbitrary text values
This formula uses the value in cell E5 for a lookup value, the named range "key" (H5:I9) for the lookup table, 2 to indicate "2nd column", and 0 as the last argument indicate exact match. You can also use FALSE instead of zero if you like. VLOOKUP...

Map inputs to arbitrary values
This formula uses the value in cell F6 for a lookup value, the range B5:C10 for the lookup table, 2 to indicate "2nd column", and zero as the last argument to force an exact match. Although in this case we are mapping numeric inputs to numeric...
Related functions

How to group a pivot table manually
In this video, we show you how to drag items manually into your own groups.