Get last entry by month and year 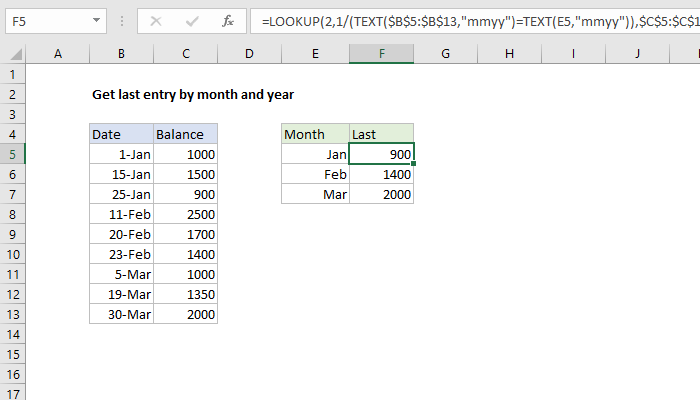 To lookup the last entry in a table by month and year, you can use the LOOKUP function with the TEXT function. In the example shown, the formula in F5 is:

Note: the lookup_value of 2 is deliberately larger than any values in the lookup_vector, following the concept of bignum.

Working from the inside out, the expression:

generates strings like "0117" using the values in column B and E, which are then compared to each other. The result is an array like this:

where TRUE represents dates in the same month and year. The number 1 is then divided by this array. The result is an array of either 1's or divide by zero errors (#DIV/0!):

which goes into LOOKUP as the lookup array. LOOKUP assumes data is sorted in ascending order and always does an approximate match. When the lookup value of 2 can't be found, LOOKUP will match the previous value, so lookup will match the last 1 in the array.

Finally, LOOKUP returns the corresponding value in result_vector, which contains the amounts in C5:C13.

Get first entry by month and year
Note: the values in E5:E7 are actual dates, formatted with the custom number format "mmyy". Working from the inside out, the expression: MATCH ( TRUE , TEXT ( date , "mmyy" ) = TEXT ( E5 , "mmyy" ) uses the TEXT function to...

Get value of last non-empty cell
In this example, the goal is to get the last value in column B, even when data may contain empty cells. This is one of those puzzles that comes up frequently in Excel, because the answer is not obvious. One way to do it is with the LOOKUP function...

Get date associated with last entry
Working from the inside out, the expression C5:G5 "" returns an array of true and false values: { FALSE , TRUE , FALSE , FALSE , FALSE } The number 1 is divided by this array, which creates a new array composed of either 1's or #DIV/0! errors: { #...

Get first non-blank value in a list
So, the gist of the problem is this: We want to get the first non-blank cell, but we don't have a direct way to do that in Excel. We could use VLOOKUP with a wildcard * (see link below), but that will only work for text, not numbers. So, we need to...

Lookup latest price
The LOOKUP function assumes data is sorted, and always does an approximate match. If the lookup value is greater than all values in the lookup array, default behavior is to "fall back" to the previous value. This formula exploits this behavior by...

Last row in numeric data
This formula uses the MATCH function in approximate match mode to locate the last numeric value in a range. Approximate match enabled by setting by the 3rd argument in MATCH to 1, or omitting this argument, which defaults to 1. The lookup value is a...

Last row in text data
This formula uses the MATCH function in approximate match mode to locate the last text value in a range. Approximate match enabled by setting by the 3rd argument in MATCH to 1, or omitting this argument, which defaults to 1. The lookup value is a so...
Related functions

Thank you for your help. I was trying to do something with Excel that I had never done before. Without your help it probably wouldn't have been done. Communication with you was pleasant and effective. The end result is great. Thanks again. -Mike