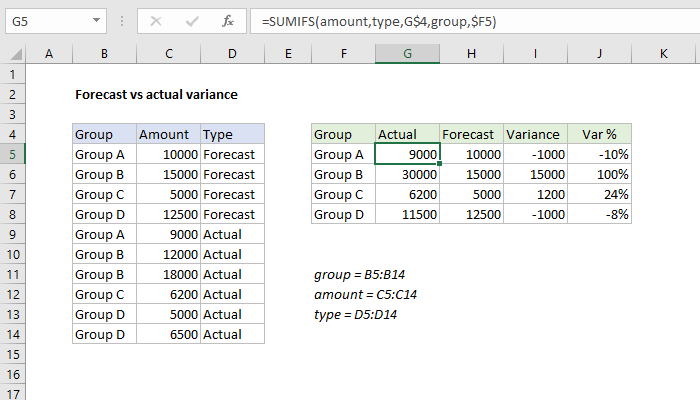 To calculate forecast versus actual variance based on a set of data, you can use can use the SUMIFS function to gather up totals, and basic other formulas to calculate variance and variance percentage. In the example shown, the formula in G5 is:

This is a pretty standard use of the SUMIFS function. In this case, we need to sum amounts based on two criteria: type (forecast or actual) and group. To sum by type, the range/criteria pair is:

where type is the named range D5:D14, and G4 is a mixed reference with the row locked in order to match the column header in row 4 when the formula is copied down.

To sum by group, the range/criteria pair is:

where group is the named range B5:B14, and F5 is a mixed reference with the column locked in order to match group names in column F when the formula is copied across.

The variance formula in column I simply subtracts forecast from actual:

The variance percentage formula in column J is:

SUMIFS is a function to sum cells that meet multiple criteria. SUMIFS can be used to sum values when corresponding cells meet criteria based on dates, numbers, and text. SUMIFS supports logical operators (>,...