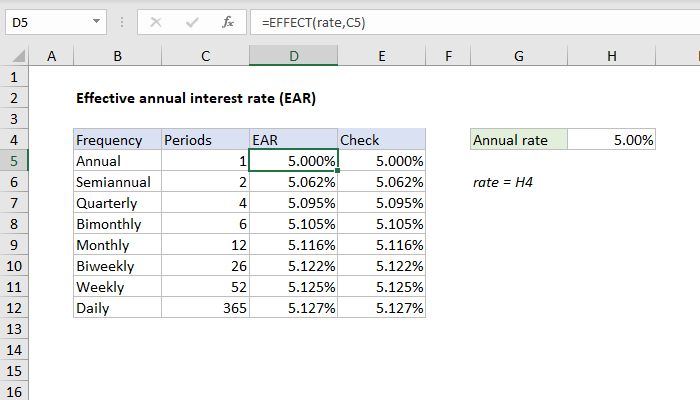 To calculate the effective annual interest rate, when the nominal rate and compounding periods are given, you can use the EFFECT function. In the example shown, the formula in D5, copied down, is:

where "rate" is the named range H4.

The Effective Annual Rate (EAR) is the interest rate after factoring in compounding. In other words, the EAR is the rate actually earned due to the effect of compounding more frequently than once a year (annually).

To demonstrate how this works, the table shown in the example is set up with various compounding periods in column C. The nominal interest rate is provided in cell H4, which is the named range "rate".

The formula in D5 is:

Because named ranges behave like absolute references, this formula can simply be copied down the table. The EFFECT function returns the calculated EAR for each of the given periods.

The generic formula for calculating EAR (in Excel formula syntax) is:

where n stands for periods, and i is the stated interest rate. This formula is used to check the results from EFFECT. In E5, the formula is:

When this formula is copied down the table, the results in columns D and E match:

Compare effect of compounding periods
The FV function calculates compound interest and return the future value of an investment over a specified term. To configure the function, we need to provide a rate, the number of periods, the periodic payment, the present value: Present value ( pv...
Related functions

The Excel RRI function returns an equivalent interest rate for the growth of an investment. You can use RRI to calculate Compound Annual Growth Rate (CAGR) in Excel.

I frequently use the resources you provide here on your website, and wanted to thank you for the awesome work you are doing. It is very well done, has great breadth, and lays out complex topics in an understandable way. -Chase