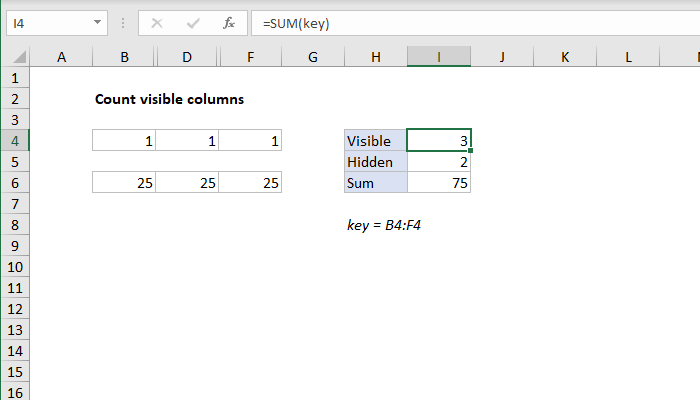 To count visible columns in a range, you can use a helper formula based on the CELL function with IF, then tally results with the SUM function. In the example shown, the formula in I4 is:

where "key" is the named range B4:F4, and all cells contain this formula, copied across:

To see the count change, you must force calculation with F9, or perform another worksheet change that triggers recalculation. Below is the same worksheet with all columns visisble:

Note: I ran into the core idea for this formula on the excellent wmfexcel.com site.

There is no direct way to detect a hidden column with a formula in Excel. You might think of using the SUBTOTAL function, but SUBTOTAL only works with vertical ranges. As a result, the approach described in this example is a workaround based on a helper formula that must be entered in a range that includes all columns in the scope of interest. In this example, this range is the named range "key".

In the example shown, columns C and E are hidden. The helper formula, entered in B4 and copied across B4:F4, is based on the CELL function:

To count visible columns, we use the SUM function formula in I4:

To count hidden columns, the formula in I5 is:

Once you have the "column key" in place, you can use it with other operations. For example, you could SUM values in visible columns by using SUM like this:

Although each cell in B6:F6 contains the number 25, SUM will return 75 when column C and E are hidden, as shown in the example.

Note: CELL function is a volatile function. Volatile functions normally recalculate with every worksheet change, so they can cause performance problems. Unfortunately, CELL does not fire when a column is hidden or made visible again. This means you will not see correct results until the worksheet recalculates, either with a normal change, or by pressing F9.

Count visible rows in a filtered list
In this example, the goal is to count rows that are visible and ignore rows that are hidden. This is a job for the SUBTOTAL function . SUBTOTAL can perform a variety of calculations like COUNT, SUM, MAX, MIN, and more. What makes SUBTOTAL...

The Excel CELL function returns information about a cell in a worksheet. The type of information to be returned is specified as info_type. CELL can get things like address and filename, as well as detailed info about the formatting used...