Count specific words in a cell 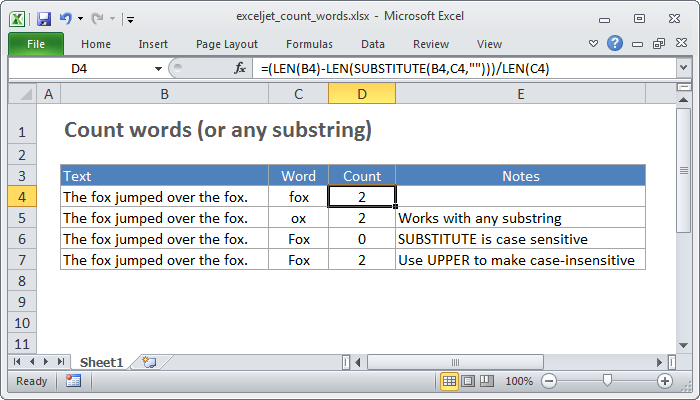 If you need to count how many times a specific a word (or any substring) appears inside a cell, you can use a formula that uses SUBSTITUTE and LEN. In the generic form of the formula above, "text" represents a cell that contains text, and "word" represents the word or substring being counted. In the example, we are using this formula:

B4 is the cell we're counting words in, and C4 contains the substring (word or any substring) you are counting.

SUBSTITUTE is a case-sensitive function, so it will match case when running a substitution. If you need to count both upper and lower case occurrences of a word or substring, use the UPPER function inside SUBSTITUTE to convert the text to uppercase before running the substitution:

Because this formula converts the substring and the text to uppercase before performing the substitution, it will work equally well with text in any case.

Counting words in Excel is tricky because Excel doesn't support regular expressions. As a result, it's difficult to target the words you want to count exactly, while ignoring substrings and other partial matches (i.e. find "fox " but not "foxes"). Punctuation and case variations make this problem quite challenging.

One workaround is to use another formula in a helper column to "normalize text" as a first step. Then use the formula on this page to count words wrapped in space characters to get an accurate count (i.e. you can look for " fox " in the normalized text.

Note: this approach is only as good as the normalized text you are able to create, and you might need to adjust the normalizing formula many times to get the result you need.

Cell contains one of many things
The goal of this example is to test each cell in B5:B14 to see if it contains any of the strings in the named range things (E5:E7). These strings can appear anywhere in the cell, so this is a literal "contains" problem. The formula in C5, copied...
Related functions

The Excel UPPER function converts a text string to all uppercase letters. Numbers, punctuation, and spaces are not affected.