Count specific characters in a cell 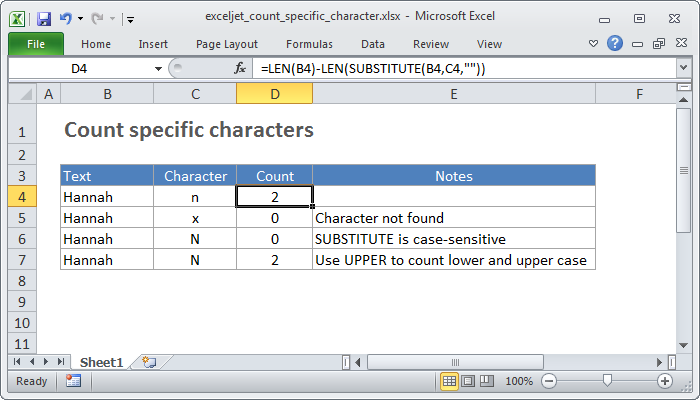 To count how many times a specific character appears in a cell, you can use a formula based on the SUBSTITUTE and LEN functions. In the generic form of the formula above, A1 represents the cell address, and "a" represents the character you want to count.

SUBSTITUTE is a case sensitive function, so it will match case when running a substitution. If you need to count both upper and lower case occurrences of a specific character, use the UPPER function inside SUBSTITUTE to convert the text to uppercase before running the substitution. Then supply an uppercase character as the text that's being substituted like this:

Count specific words in a cell
If you need to count how many times a specific a word (or any substring) appears inside a cell, you can use a formula that uses SUBSTITUTE and LEN. In the generic form of the formula above, a1 represents a cell that contains text, and txt represents...

The Excel UPPER function returns a upper-case version of a given text string. Numbers and punctuation are not affected.