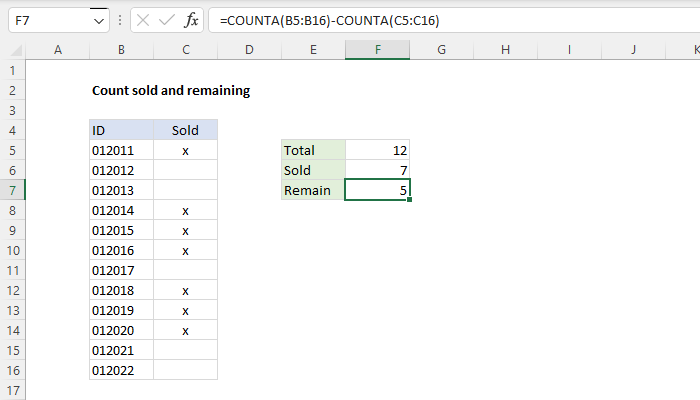 The result is 5, since 7 out of 12 items have been sold. You can also use the COUNTIF function to solve this problem. Both approaches are described below.

In this example, the goal is to count the number of items sold and remaining, based on the data visible in columns B and C. The ID column holds unique ids, and the Sold column is used to record a sale. An "x" in the Sold column indicates the item has been sold. As is typical in Excel, there are several ways to solve this problem. The article below explains two approaches.

The COUNTA function counts non-blank cells in a range. Unlike the COUNT function, which only counts numeric values, COUNTA will count any value in a cell, including numbers and text. The first formula in F5 counts the total items available:

The result is 12 since there are 12 values in the ID column. The second formula counts the number of items that have been sold:

The result is 7 since there are 7 values in the Sold column. Note that COUNTA doesn't care what value is in a cell. In the example shown, we are using an "x" to indicate sold items, but COUNTA would count "y" or "z" in the same way. The last formula counts the number of remaining items:

The result is 5 since 12 minus 7 equals 5. In this example, last formula above is an all-in-one formula, to provide more detail. However, in this particular case, the best practice would be to write the last formula like this:

In other words, we simply re-use existing results. This minimizes the number of calculations performed and reduces errors.

The COUNTIF function counts values in a range based on supplied criteria. With COUNTIF the problem can be solved a bit differently. To count total items, you can use COUNTIF like this:

To count sold items you can use either of these formulas:

To count items not sold, you can use COUNTIF like this:

For more information about how this formula works, see this explanation.

Basic inventory formula example
This formula demonstrates a very simple inventory concept where current inventory is simply the result of all incoming stock minus all outgoing stock. In the example, colors are treated as unique item identifiers – imagine a product available in one...
Related functions

Just want to say that I really appreciate what you are doing on this website. I have learned a lot about various excel functions through you and I really applaud your teaching method. It's very clear and easy to understand and apply. -Tammy