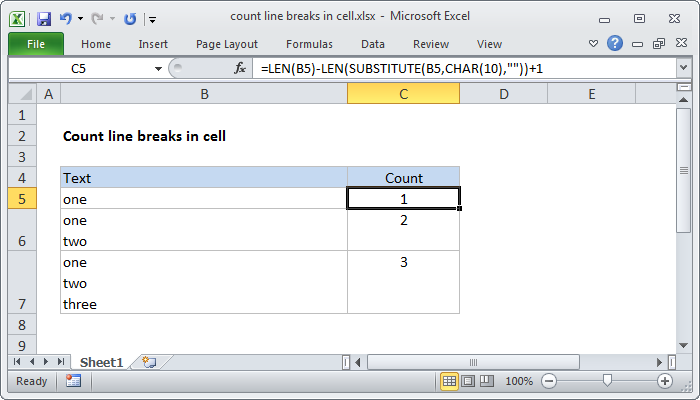 To count total lines in a cell, you can use a formula based on the LEN, SUBSTITUTE, and CHAR functions. In the example shown, the formula in C5 is:

First, the LEN function counts total characters in the cell B5.

Next SUBSTITUTE removes all "line returns" from the text in B5 by looking for CHAR(10) which is the character code for the return character in Windows. LEN returns the result inside of a second LEN, which counts characters without carriage returns.

The second count is subtracted from the first, and 1 is added to the final result, since the number of lines is the number of returns + 1.

The formula in the example shown will return 1 even if a cell is empty. If you need to guard against this problem, you can wrap the formula in IF statement like so:

On a Mac, the code for line break character is 13 instead of 10, so use this formula instead:

In Excel 365, both Win and Mac versions of Excel use CHAR(10) as a line break.
Author
Dave Bruns
Related formulas

Add a line break with a formula
This formula "glues together" the pieces of text that appear in B4, C4, and D4 using the ampersand (...

Extract multiple lines from a cell
At the core, this formula looks for a line delimiter ("delim") and replaces it with a large number of spaces using the SUBSTITUTE and REPT functions. Note: In older versions of Excel on a Mac, use CHAR(13) instead of CHAR(10). The CHAR function...
Related functions

How to concatenate with line breaks
In this video we demo how to join different values together in one cell with line breaks. This also includes a clever way to add spaces and commas without using double quotes.
Related courses
Core Formula

I cannot understand how you guys make money when you're giving away this amazing product for free, but thank you! Keep it up. -Chris