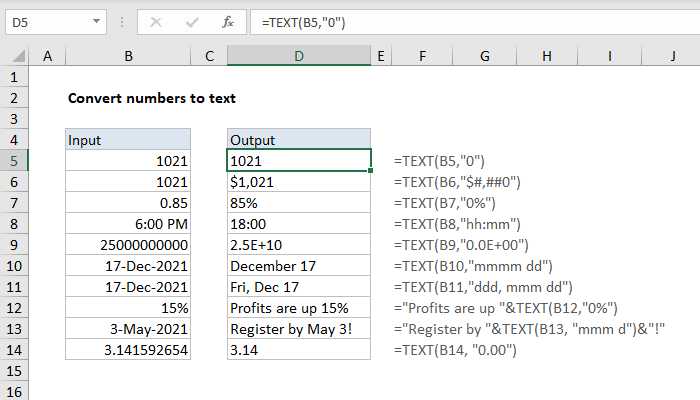 To convert numbers into text values, you can use the TEXT function. In the example shown, the formula in C5 is:

Normally, you want to maintain numeric values in Excel, because they can be used in formulas that perform numeric calculations. However, there are situations where converting numbers to text makes sense. One example is when you want to concatenate (join) a formatted number to text. For example, "Sales last year increased by over 15%", where the number .15 has been formatted with a percent symbol. Without the TEXT function, the number formatting will be stripped. Another example is when you want to perform a lookup on numbers using wildcards, which can't be done with numeric values.

To convert a number in A1 to a text value without number formatting, you can concatenate the number to an empty string ("") like this:

Convert text to numbers
In this example, the values in column A are "stored as text". This means if you try to SUM column A, you'll get a result of zero. The VALUE function will try to "coerce" a number stored as text to a true number. In simple cases, it will just work...

Convert date to Julian format
This formula builds the final result in 2 parts, joined by concatenation with the ampersand (...

Pad week numbers with zeros
The TEXT function can apply number formats of any kind, including currency, date, percentage, etc. By applying a number format like "00", "000", "0000", you can "pad" numbers with as many zeros as you like. Zeros will only be added where needed...
Related functions