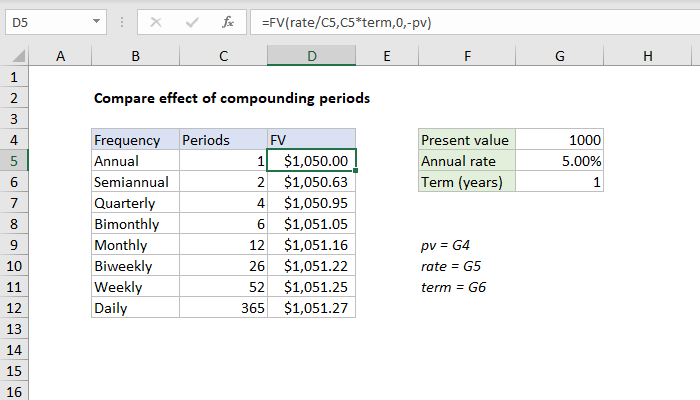 To compare the effect of (non-annual) compounding periods on growth, you can set up a worksheet as shown, and calculate future value with the FV function. In the example shown, $1000 is invested with an annual interest rate of 5%, the formulas in column D calculate the future value of the $1000 assuming the compounding periods shown in column C. The formula in D5, copied down, is:

The FV function calculates compound interest and return the future value of an investment over a specified term. To configure the function, we need to provide a rate, the number of periods, the periodic payment, the present value:

By convention, the present value (pv) is input as a negative value, since the $1000  "leaves your wallet" and goes to the bank during the term.

The named ranges automatically behave like absolute references, so there is no need to use dollar signs ($).

Just wanted to say "Thank you" and I feel lucky I found your website! I work with contracts and your link lead me to a concise answer. No other link came close. -Karen