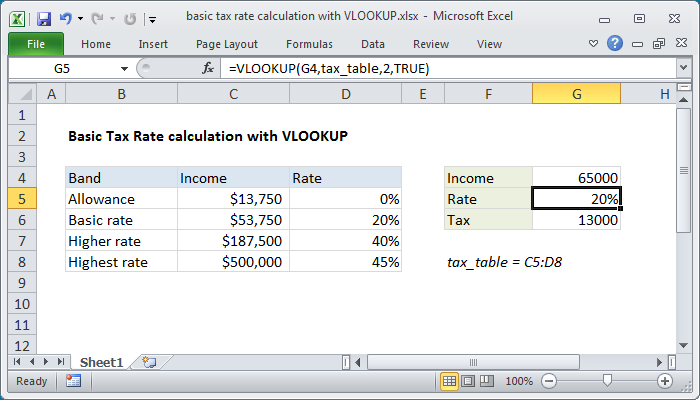 To calculate a tax rate based on a simple tax rate table, you can use the VLOOKUP function. In the example shown, the formula in G5 is:

Note: this formula determines a single tax rate. To calculate tax based in a progressive system where income is taxed across multiple brackets at different rates, see this example.

VLOOKUP requires lookup values to be in the first column of the lookup table. Because the first column in the example is actually "Band", we are purposely excluding this column from the table range provided to VLOOKUP, which is configured like this:

With this configuration, VLOOKUP scans the lookup values until it finds a value higher than the value in G4, then VLOOKUP "drops back" to the previous row and returns the tax rate in that row. Because we are using using VLOOKUP in approximate match mode, lookup values must be sorted in ascending order.

Tax rate calculation with fixed base
This example shows how to set up simple formula using the IF function to calculate a tax amount with both fixed and variable components. In the example shown, the formula in C5 is: = IF ( B5 < limit , B5 * rate ,( B5 - limit ) * rate + fixed ) in...
Related functions

I want to thank you for your posting of "Split dimensions into three parts" on your web site. You have saved our company many hours of PITA work. Our calculations of cubic inches are a slam dunk now! -Doug