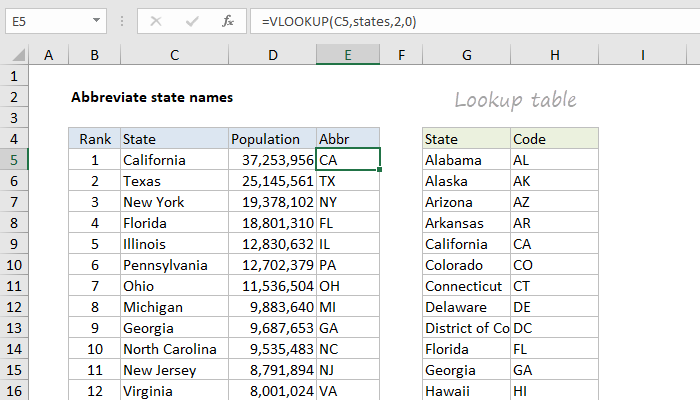 To convert full state names to their two letter abbreviation (i.e. Minnesota > MN), you can use a simple formula based on VLOOKUP. In the example shown, the formula in E5 is:

This formula relies on a table with columns for both the full state name and the 2-letter abbreviation. Because we are using VLOOKUP, the full name must be in the first column. For simplicity, the table has been named "states".

VLOOKUP is configured to get the lookup value from column C. The table array is the named range "states", the column index is 2, to retrieve the abbreviation from the second column). The final argument, range_lookup, has been set to zero (FALSE) to force an exact match.

VLOOKUP locates the matching entry in the "states" table, and returns the corresponding 2-letter abbreviation.

This is a good example of how VLOOKUP can be used to convert values using a lookup table. This same approach can be used to lookup and convert many other types of values. For example, you could use VLOOKUP to map numeric error codes to human readable names.

If you want to use the same named range "states" you can use this version to convert a 2-letter abbreviation to a full state name.

Group numbers with VLOOKUP
If you need to group by number, you can use the VLOOKUP function with a custom grouping table. This allows you to make completely custom or arbitrary groups. In the example shown, the formula in F7 is: = VLOOKUP ( D5 , age_table , 2 , TRUE ) How...

VLOOKUP without #N/A error
To hide the #N/A error that VLOOKUP throws when it can't find a value, you can use the IFERROR function to catch the error and return any value you like. How the formula works When VLOOKUP can't find a value in a lookup table, it returns the #N/A...

How to use VLOOKUP for approximate matches
In this video, we look at how to configure VLOOKUP to look up values based on an approximate match. This is good for tax rates, postage, commissions, and the like.
See also
23 things you should know about VLOOKUP

You made working with Excel more fun and really easier. -Yen