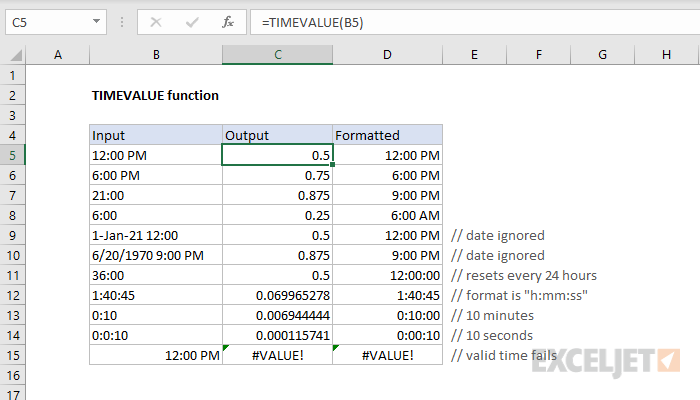 The Excel TIMEVALUE function converts a time represented as text into a proper Excel time. For example, the formula =TIMEVALUE("9:00 AM") returns 0.375, the numeric representation of 9:00 AM in Excel's time system. Numeric time values are more useful than text since they can be directly manipulated with formulas and pivot tables.

Sometimes, times in Excel appear as text values that are not recognized properly as time. The TIMEVALUE function is meant to parse a time that appears as a text value into a valid Excel time. A native Excel time is more useful than text because it is a numeric value that can be formatted as time and directly manipulated in a formula.

The TIMEVALUE function takes just one argument, called time_text. If time_text is a cell address, the value in the cell must be text. If time_text is entered directly into the formula it must be enclosed in double quotes (""). Time_text should be supplied in a text format that Excel can recognize, for example, "6:45 PM" or "18:45". TIMEVALUE ignores dates if present in a text string.

The TIMEVALUE function creates a time in serial number format from a date and/or time in an Excel text format. TIMEVALUE will return a decimal number between 0 and 0.99988426, representing 12:00:00 AM to 11:59:59 PM. Because the maximum value returned by TIMEVALUE is less than 1, hours will reset every 24 hours (like a clock).

The formulas below show the output from TIMEVALUE:

To display the output from TIMEVALUE as a formatted time, apply a time number format.

Notice that the TIMEVALUE formula in C15 fails with a #VALUE! error, because cell B15 already contains a valid time. This is a limitation of the TIMEVALUE function. If you have a mix of valid and invalid dates, you can use the simple formula below as an alternative:

The math operation of adding zero will cause Excel will try to coerce the value in A1 to a number. If Excel is able parse the text into a proper time it will return a valid time as a decimal number. If the time is already a valid Excel time, adding zero will have no effect, and generate no error.

Convert date string to date time
To get the date, we extract the first 10 characters of the value with LEFT: LEFT(B5,10) // returns "2015-03-01" The result is text, so to get Excel to interpret as a date, we wrap LEFT in DATEVALUE, which...
Related functions

The Excel DATEVALUE function converts a date represented as a text string into a valid Excel date. For example, the formula =DATEVALUE("3/10/1975") returns a serial number (...

The Excel TIMEVALUE function converts a time represented as text into a proper Excel time. For example, the formula =TIMEVALUE("9:00 AM") returns 0.375, the numeric representation of 9:00 AM in Excel's time system. Numeric time values are more...

The Excel NUMBERVALUE function converts a number in text format to numeric value, using specified decimal and group separators. This function can be used to convert locale-specific values into locale-independent values.

As someone that flitted about the edges of Excel for my entire career, I am really enjoying your course. By far and away the best one out there. -Alex