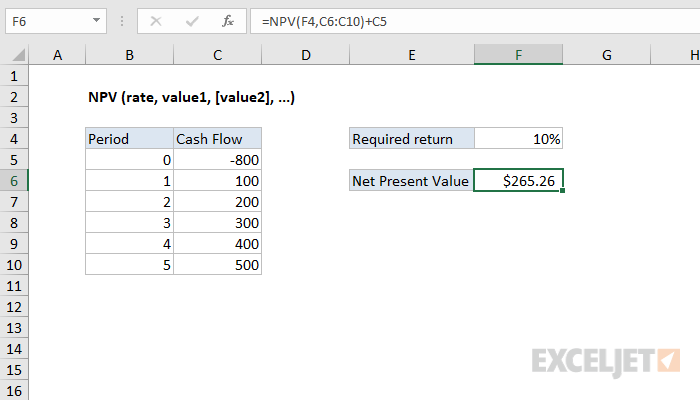 The Excel NPV function is a financial function that calculates the net present value (NPV) of an investment using a discount rate and a series of future cash flows.

As Timothy R. Mayes, author of Financial Analysis with Microsoft Excel, says on his website TVMCalcs.com:

One simple approach is to exclude the initial investment from the values argument and instead subtract the amount outside the NPV function.

In the example shown, the formula in F6 is:

Note the initial investment in C5 is not included as a value, and is instead added to the result of NPV (since the number is negative).

Excel PV Function
The Excel PV function is a financial function that returns the present value of an investment. You can use the PV function to get the value in today's dollars of a series of future payments, assuming periodic, constant payments and a constant...

The Excel IRR function is a financial function that returns the internal rate of return (IRR) for a series of cash flows that occur at regular intervals.

Thank you so much for creating this website, it helps me 100% of the time. It's just the best explanations, simple and easy to understand. -Jill