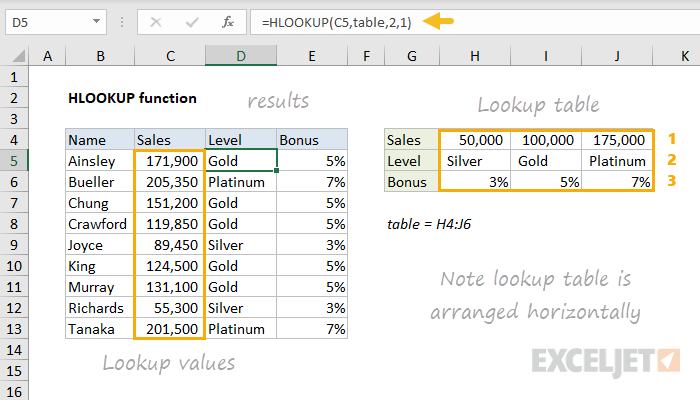 The Excel HLOOKUP function finds and retrieve a value from data in a horizontal table. The "H" in HLOOKUP stands for "horizontal", and lookup values must appear in the first row of the table, moving horizontally to the right. HLOOKUP supports approximate and exact matching, and wildcards (* ?) for finding partial matches.

The HLOOKUP function can locate and retrieve a value from data in a horizontal table. Like the "V" in VLOOKUP which stands for "vertical", the "H" in HLOOKUP stands for "horizontal". The lookup values must appear in the first row of the table, moving horizontally to the right. HLOOKUP supports approximate and exact matching, and wildcards (* ?) for finding partial matches.

HLOOKUP takes four arguments. The first argument, called lookup_value, is the value to look up. The second argument, table_array, is a range that contains the lookup table. The third argument, row_index_num is the row number in the table from which to retrieve a value. In the example shown, HLOOKUP is used to look up values from row 2 (Level) and row 3 (Bonus) in the table. The fourth and final argument, range_lookup, controls matching. Use TRUE or 1 for an approximate match and FALSE or 0 for an exact match.

In the example shown, the goal is to look up the correct Level and Bonus for the sales amounts in C5:C13. The lookup table is in H4:J6, which is the named range "table". Note this is an approximate match scenario. For each amount in C5:C13, the goal is to find the best match, not an exact match.  To lookup Level, the formula in cell D5, copied down, is:

To get Bonus, the formula in E5, copied down, is:

Notice the only difference between the two formulas is the row index number: Level comes from row 2 in the lookup table, while Bonus comes from row 3. The match mode has been set explicitly to approximate match by providing the last argument, range_lookup, as 1.

In the screen below, the goal is to look up the correct level for a numeric rating 1-4. In cell D5, the HLOOKUP formula, copied down, is:

where table is the named range G4:J5. Notice the last argument, range_lookup is set to FALSE to require an exact match.

Get first text value with HLOOKUP
Sometimes, you may want to check a range of several columns and extract the first text value found. You can do this with the HLOOKUP function and the asterisk wildcard character (*). In the formula shown, HLOOKUP is...

How to use HLOOKUP
In this video we'll look at how to use the HLOOKUP function. HLOOKUP works like VLOOKUP but is meant for data in a horizontal arrangement.
Related functions

I am always relieved when I Google an Excel operation I am trying to achieve and your site comes up with an answer. Your outline of syntax and explanations are always comprehensive and clear. -Patrick