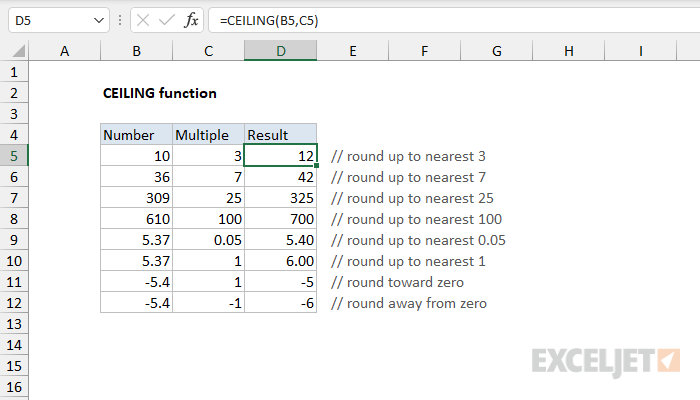 The Excel CEILING function rounds a number up to a given multiple. The multiple to use for rounding is provided as the significance argument. If the number is already an exact multiple, no rounding occurs and the original number is returned.

The CEILING function takes two arguments, number, and significance. Number is the numeric value to round up. The significance argument is the multiple to which number should be rounded. In most cases, significance is provided as a numeric value, but CEILING can also understand time entered as text like "0:15". See the example below.

CEILING works like the MROUND function, which also rounds to a given multiple. However, unlike MROUND, which rounds to the nearest multiple, the CEILING function rounds up to the next multiple.

Note: the CEILING function is officially listed as a compatibility function, replaced by CEILING.MATH and CEILING.PRECISE.

The formulas below show how CEILING rounds up values to a given multiple:

To round a number in A1 up to the nearest multiple of 5, you can use a formula like this:

Round pricing up to end with .99

CEILING can be useful to set pricing after currency conversion or discounts are applied. For example, the formula below will round a value in A1 up to the next whole dollar, then subtract 1 cent, to return a price like $2.99, $5.99, $49.99, etc.

Round time up to nearest 15 minutes

CEILING understands time formats and can be used to round time up to a given multiple. For example, to round a time in A1 up to the nearest 15 minutes, you can use CEILING like this:

Excel provides a number of functions for rounding:

Round price to end in .45 or .95
The key to solving this problem is to realize that the solution requires a specific kind of rounding. We can't just round to the "nearest" .45 or .95 value. In fact, the first step is to round up to the nearest half...

Round a number up to next half
The Excel CEILING function rounds a number up to a given multiple. The multiple to use for rounding is given as the second argument (significance). If the number is already an exact multiple, no rounding occurs.  In...

Round a number up to nearest multiple
The Excel CEILING function rounds a number up to a given multiple. The multiple to use for rounding is given as the second argument (significance). If the number is already an exact multiple, no rounding occurs. ...

Next biweekly payday from date
This formula depends on the CELING function, which rounds numbers up to a given multiple. It works because how dates work in Excel's default 1900 date system, where the first day in the system is the number 1, equal to...

Shade alternating groups of n rows
Working from the inside out, we first "normalize" row numbers to begin with 1 using the ROW function and an offset: ROW()-offset In this case, the first row of data is in row 5, so we use an offset of 4: ROW()-4...

Running count group by n size
The core of this formula is the COUNTA function, configured with an expanding range like this: COUNTA($B$5:B5) As the formula is copied down the column, the range starting with B5 expands to include each new row, and...

Randomly assign people to groups
At the core of this solution is the RAND function, which is used to generate a random number in a helper column (column C in the example). To assign a full set of random values in one step, select the range C5:C16,...

Round by bundle size
The gist of this formula is that it figures out bundles needed, given items needed, and a specific bundle size. For example, if you need 6 items, and the bundle size is 2, you'll need 3 bundles. If you need 3 items,...

The Excel MROUND function returns a number rounded to a given multiple. MROUND will round a number up or down, depending on the nearest multiple.

The Excel FLOOR function rounds a given number down to the nearest specified multiple. FLOOR works like the MROUND function, but FLOOR always rounds down.

The Excel ROUND function returns a number rounded to a given number of digits. The ROUND function can round to the right or left of the decimal point.

The Excel ROUNDDOWN function returns a number rounded down to a given number of places. Unlike standard rounding, where only numbers less than 5 are rounded down, ROUNDDOWN rounds all numbers down.

The Excel INT function returns the integer part of a decimal number by rounding down to the integer. Note that negative numbers become more negative. For example, while INT(10.8) returns 10, INT(-10.8) returns -11.