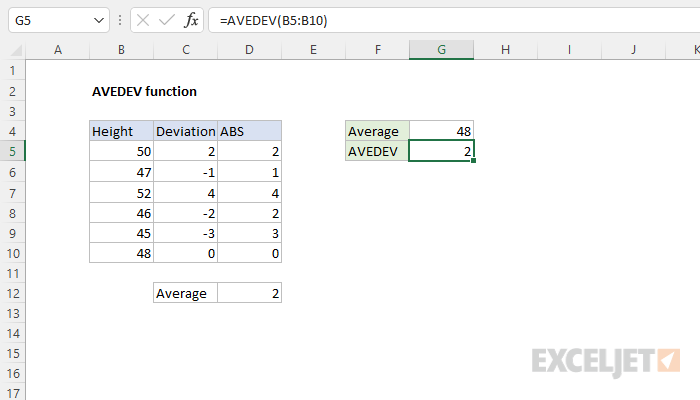 The Excel AVEDEV function calculates the average of absolute deviations from the mean in a given set of data.

Variance and standard deviation functions deal with negative deviations by squaring deviations before they are averaged. AVEDEV handles negative values by working only with absolute values. This average is called the average absolute deviation. It's an easy way to show variability in a data set, but not as common as variance and standard deviation. One advantage of AVEDEV is that units remain unchanged. If values are centimeters, the absolute average deviation is in centimeters as well.

AVEDEV takes multiple arguments in the form number1, number2, number3, etc. up to 255 total. Arguments can be a hardcoded constant, a cell reference, or a range. Empty cells, and cells that contain text or logical values are ignored.

The Excel VAR function estimates the variance of a sample of data. If data represents the entire population, use the VARP function or the newer VAR.P function. VAR ignores text values and logicals in references.

Never seen tutorials so detailed and well described - impossible not to lean from here. I recommend you guys to everybody! Keep up the excellent work, you saved my life countless times! -Stephanie