How to disable Scroll Lock in Excel

Your report is due in an hour. You're working along in Excel, things are going fine, when suddenly you notice that you can no longer move around properly. You press the arrow keys, but instead of the cursor moving to another cell, the entire worksheet seems to be moving about. WTF?!

Before you panic, and call support to tell them Excel is broken, check to see if Scroll Lock has been accidentally enabled.

What is Scroll Lock?

If you don't understand what's going on, this can be quite distressing :) 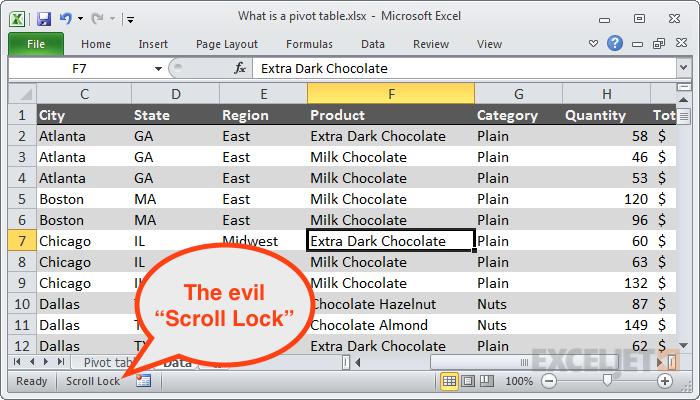 Fortunately, the Scroll Lock setting is a toggle, much like Caps Lock. If you have a Scroll Lock key on your keyboard, just press it to toggle Scroll Lock off. Done.

No key for Scroll Lock?

Unfortunately, it's harder to disable Scroll Lock if your keyboard doesn't have a Scroll Lock key. How can you press a key you don't have?

The "trick" is to figure out how to send the equivalent of the Scroll Lock keystroke to Excel. The rest of this article explains how to do that on both Mac and Windows.

Is Scroll Lock really on?

First, make sure Scroll Lock is really enabled. You can do this by working with the status bar, the name for the bottom edge of the Excel Window, which displays various information about the state of the current worksheet.

Right click the status bar to make sure Scroll Lock status is enabled: 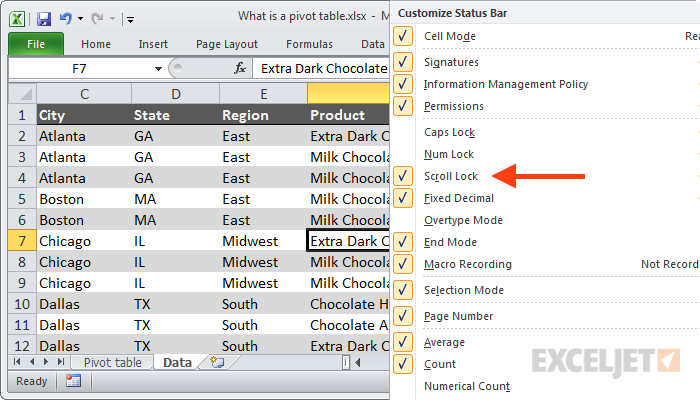 Once you make sure that the Scroll Lock status is on, look for the Scroll lock message in the lower left.

Yes, Scroll Lock is turned on. 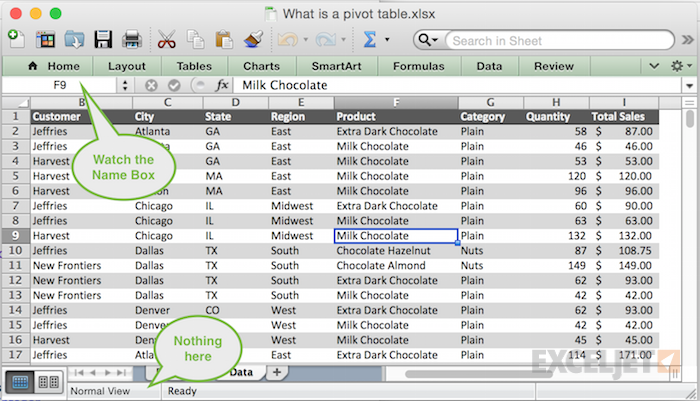 How to disable Scroll Lock on Windows

If you're using a full keyboard in Windows – one that has a Scroll Lock key – simply press the key to disable. You should see the Scroll Lock message disappear from the status bar and then be able to move around normally.

If your keyboard does not have a Scroll Lock key, you can access a virtual keyboard in Windows via Start > All Programs > Accessories > Ease of Access > On-Screen Keyboard.

The On-Screen Keyboard in Windows, Scroll Lock key in white

Once the keyboard is displayed, make sure Excel is the active application and click the ScrLk key. That should do it.

How to disable Scroll Lock on a Mac

The official Microsoft shortcut for Scroll Lock is Shift + F14. If you have an extended keyboard with an F14 key, try that first.

A Mac Extended Keyboard has an F14 key (click to enlarge)

If you have a Macbook Pro, or other machine with a smaller keyboard that does not have extended keys, you'll have to go a little deeper.

You'd think that you could go System Preferences > Keyboard, then enable an extended virtual keyboard, then use that to press F14. But, after an hour so of fiddling around, I couldn't get it to work, and I'm not sure it can be done.

It seems that the Mac is "aware" of the keyboard currently attached, and uses this information to display the virtual keyboard. If you know a way to enable an extended virtual keyboard (on a Mac that doesn't have one attached), please let me know.

Virtual Keyboard, a commercial freeware utility by Corallo Software (14 day trial) seems to work, but I did very little testing.

AppleScript to the rescue

While researching this problem, I ran into a nice AppleScript by Damien Clark here. However, I couldn't get the script work like I expected. I could enable Scroll Lock with the script. But when I ran the script again, Scroll Lock wasn't disabled.

At least not without checking the "use all F1, F2, etc keys as standard function keys setting" checkbox in the Mac's keyboard preferences...which made the process pretty confusing.

So, after a bit more investigation (read: a few hours flailing about), I adapted the script to send the equivalent of fn + shift + F14, with a small delay. This works on my 2015 Macbook Pro reliably to turn Scroll Lock on and off.

To use this script, run the AppleScript Editor, create a new file, and paste in the code above. Then compile the script (Command + K), and run it (play button, or Command + R).

If Scroll Lock is currently on, it should be disabled.

Caution: if Scroll Lock is not currently enabled, it will be enabled, so you'll need to run the script again to toggle it off again.

Your website saved my life! I have an ICT practical test tomorrow and I still don't understand some of the functions but your videos helped a lot! Thank you so much. -Maryam