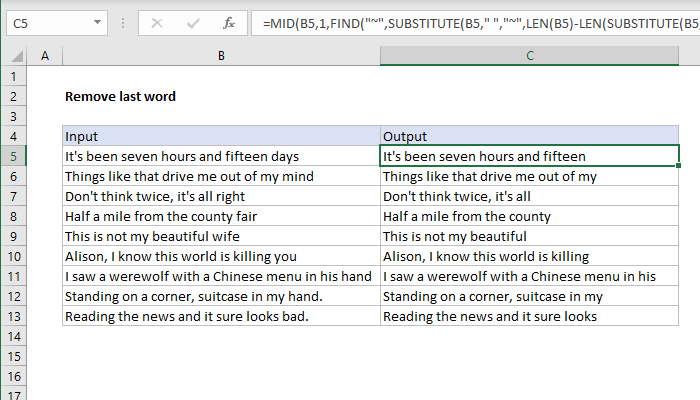 To remove the last word from a text string, you can use a formula based on the MID function, with help from SUBSTITUTE, LEN, and FIND. In the example shown, the formula in cell B5 is:

The formula is a bit convoluted, but the steps are simple. We first count how many spaces exist in the text using LEN and SUBSTITUTE. Next, we use the somewhat obscure "instance" argument in the SUBSTITUTE function to replace the last space with a tilde (~). Finally, we use FIND to figure out where the tilde is, and the MID function to discard everything after the tilde.

Working from the inside-out, we use the LEN and SUBSTITUTE functions to count how many spaces appear in the next:

For the text in B5, this returns 6. This page explains this part of the formula in more detail. This tells us we want to cut the text at the 6th space character.

Note: if words are separated by more than one space, you'll want to normalize spaces first with the TRIM function.

The number 6 is then plugged into another SUBSTITUTE as the "instance number":

Here, we are replace the 6th instance of a space (" ") with a tilde (~). After SUBSTITUTE runs, it returns this string:

Note: we use a tilde (~) only because it's a rarely occurring character. You can use any character you like, so long as it doesn't appear in the source text.

Next, we use the FIND function to locate the tilde:

FIND returns 34, since the tilde is the 34st character. We subtract 1 from this number, because we don't want to include the last space in the final result. We can now simplify the formula to:

The MID function then returns characters 1-33:

With a custom delimiter

The same formula can be used with a different delimiter. For example, to remove all text after the last forward slash "/", you can use:

You can adapt the formula to remove the last 2 words, last 3 words, etc. The general form is:

where d is the delimiter, and n is the number of words to remove.

Remove text by position
The replace function lets you replace text based on its location and length. In this case, we want to strip off the drive and path, and leave only the document name.The length of this part of the string (text) is 24 and the starting position is 1,...

Remove text by variable position
The REPLACE function will replace text by position. You can use REPLACE to remove text by providing an empty string ("") for the "new_text" argument. In this case, we want to remove the labels that appear inside text. The labels vary in length, and...

Remove characters from right
The LEFT function is perfect for extracting characters starting from the left side of a text string. We use LEFT in this formula to extract all characters up to the number of characters we want to trim. The challenge, for values with variable length...
Related functions