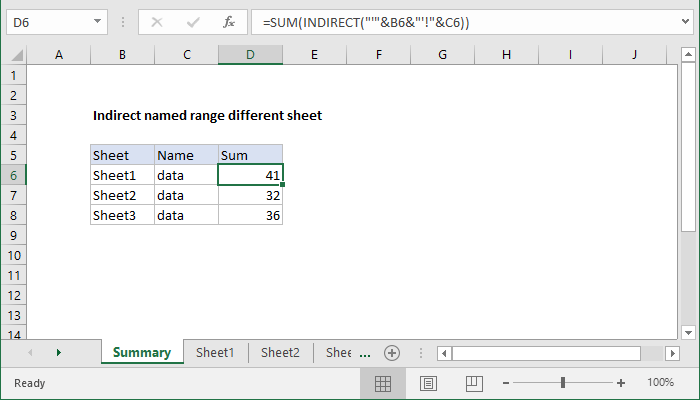 To reference a named range on another sheet, you can use the INDIRECT function with the required sheet syntax. In the example shown, the formula in D6 is:

Which returns the sum of the named range "data" on Sheet1.

Once the string is assembled using values in B6 and C6, INDIRECT evaluates and transforms the string into a proper reference.

Note you can refer to a named range in a formula without using INDIRECT. For example, the formula in D6 could be written:

However, if you want to assemble the reference as text, and have Excel treat the text as a reference, you need to use INDIRECT.

Note: The single quotes are added in the formula above so that the formula will work when a sheet name contains spaces.

Worksheet name exists
To test if a worksheet name exists in a workbook, you can use a formula based on the ISREF and INDIRECT functions. In the example shown, the formula in C5 is: = ISREF ( INDIRECT ( B5 & "!A1" )) How this formula works The ISREF function...

Dynamic worksheet reference
To create a formula with a dynamic sheet name you can use the INDIRECT function. In the example shown, the formula in C6 is: = INDIRECT ( B6 & "!A1" ) Note: The point of this approach is it lets you to build a formula where the sheet...

3D sum multiple worksheets
To sum the same range in one or more sheets, you can use the SUM formula with a special syntax called a "3d reference". In the example shown, the formula in D6 is: = SUM ( Week1:Week5 ! D6 ) How this formula works The syntax for referencing a range...

3D SUMIF for multiple worksheets
To conditionally sum identical ranges that exist in separate worksheets, all in one formula, you can use the SUMIF function with INDIRECT , wrapped in SUMPRODUCT . In the example shown, the formula looks like this: = SUMPRODUCT ( SUMIF ( INDIRECT...
Related functions

I have used vlookup a lot and read some about index and match, but decided to add extra columns and stay with vlookup, however, your site was so very clear that making the switch (only where necessary) was very easy. For the first time, I understand index and match match. Thank you. -Garth