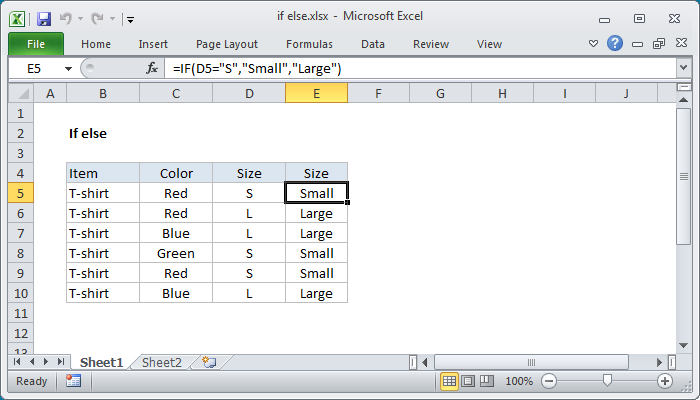 In the example shown, we have a list of T-shirts that includes color and size. However, the size is abbreviated as "S" for small and "L" for large. There are only these two sizes in the data. Let's say you want to write a formula to expand these abbreviations and show either the word "Small" or "Large" in column E. In other words:

In the example, we need to test cells in column D to see what they contain, so the formula we are using in cell E5 is:

Notice we are only testing for "S" — we don't need to test for "L". That's because we only have two possible values, and the ELSE part of the formula (the FALSE result) logically takes care of "L" for us: if the cell doesn't contain "S", it must be "L".

This works fine for two conditions, but what if we have a third condition?, for example, "M" for "Medium"? In that case, we need to extend the formula with another IF statement. We put the second IF statement, replacing the false result. In the example below, we've added another size (Medium). The formula we are using in E5 is: 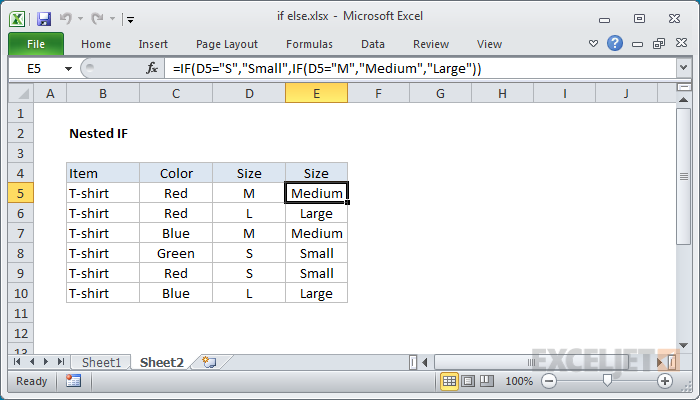 This technique is called "nesting", since we are placing on function inside another. With it is used with the IF function, you'll sometimes hear it called a "Nested IF statement". This page has many examples.

If you have many possible options, a lookup function like VLOOKUP can provide an easier solution.

If this AND that
To do something specific when two or more conditions are TRUE, you can use the IF function in combination with the AND function to evaluate conditions with a test, then take one action if the r esult is TRUE, and (optionally) do take another if the...

If cell is this OR that
In the example shown, we want to mark or "flag" records where the color is red OR green. In other words, we want to check the color in column B, and then leave a marker (x) if we find the word "red" or "green". In D6, the formula were using is: = IF...

If NOT this or that
The behavior of the IF function can be easily extended by adding logical functions like AND , and OR , to the logical test. If you want to reverse existing logic, you can use the NOT function. In the example shown, we want to "flag" records where...

If cell contains
One limitation of the IF function is that it does not support wildcards like "?" and "*". This means you can't use IF by itself to test for text that may appear anywhere in a cell. One solution is a formula that uses the IF function together with...

The IF function
In this video we'll look at how to use the IF function, one of the most powerful and popular functions in Excel.

If this OR that
In this video we look at how to combine the IF function with the OR and AND functions to test more than one condition at the same time.