Get week number from date 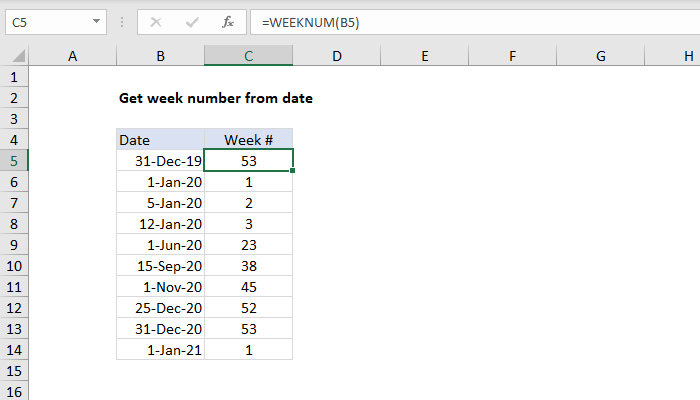 To get the week number from the day from a date, you can use the WEEKNUM function. In the example shown, the formula in C5, copied down, is:

Note: The date must be in a form that Excel recognizes as a valid date.

How this formula works:

The WEEKNUM function takes two arguments, a date, and, optionally, an argument called return_type, which controls the scheme used to calculate the week number.

With ISO week numbers, week 1 starts on the Monday of the first week in a year with a Thursday. This means that the first day of the year for ISO weeks is always a Monday in the period between Jan 29 and Jan 4.

Starting with Excel 2010 for Windows and Excel 2011 for Mac, you can generate an ISO week number using 21 as the return_type:

In Excel 2013, there is a new function called ISOWEEKNUM.

Get day name from date
If you need to get the day name (i.e. Monday, Tuesday, etc.) from a date, there are several options depending on your needs. Do you just want to display the day name? If you only want to display a day name, you don't need a formula – you can use a...

Get month from date
If you need to extract the month from a date, you can use the MONTH function. In the generic form of the formula above, the date must be in a form that Excel recognizes as a valid date. How this formula works The MONTH function takes just one...

Get year from date
If you need to extract the year from a date, you can use the YEAR function. In the generic form of the formula above, the date must be in a form that Excel recognizes as a valid date. How the formula works The YEAR function takes just one argument,...
Related functions

The Excel WEEKNUM function takes a date and returns a week number (1-54) that corresponds to the week of year. The WEEKNUM function starts counting with the week that contains January 1. By default, weeks begin on Sunday.

The Excel ISOWEEKNUM function takes a date and returns a week number (1-54) that follows ISO standards, where weeks begin on Monday and week number 1 is assigned to the first week in a year that contains a Thursday.