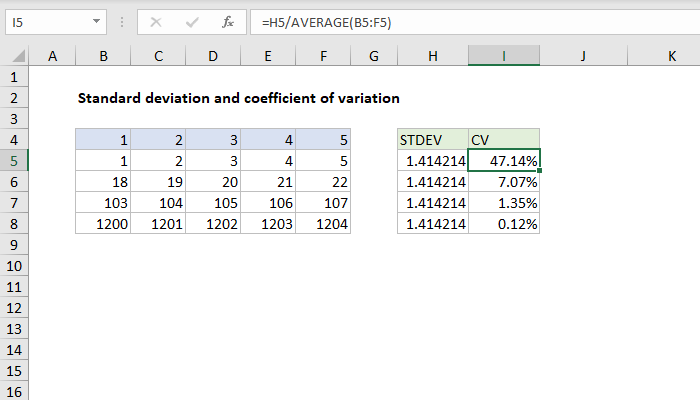 To calculate coefficient of variation (CV) in Excel you can use the STDEV.P function or STDEV.S function with the AVERAGE function. In the example shown, the the formula in I5 is:

where H5 contains the calculated standard deviation of B5:F5. The result is formatted with the percentage number format.

In this contrived example, standard deviation is calculated in column H with the STDEV.P function:

Notice that the standard deviation is the same for all data series (1.414214) even though the means vary substantially. To calculate the coefficient of variation (CV), the formula in I5 is:

This formula picks divides the standard deviation in H5 by the mean of B5:F5, calculated with the AVERAGE function. The result is a decimal value, formatted with the percentage number format.

Standard deviation calculation
To calculate the standard deviation of a data set, you can use the STEDV.S or STEDV.P function, depending on whether the data set is a sample, or represents the entire population. In the example shown, the formulas in F6 and F7 are: = STDEV.P ( C5:...

Average numbers
To get the average of a set of numbers, use the AVERAGE function. In the example shown, the formula in E5 is: = AVERAGE ( B5:D5 ) which is then copied down the table. How this formula works AVERAGE is an automatic function in Excel. In most cases,...

Conditional mode with criteria
To calculate a conditional mode with one or more criteria you can use an array formula based on the IF and MODE functions. In the example shown, the formula in F5 is: { = MODE ( IF ( group = E5 , data )) } where "group" is the named range B5:B14,...
Related functions

The Excel AVERAGE function returns the average of values provided. AVERAGE can handle up to 255 individual arguments, which can include numbers, cell references, ranges, arrays, and constants.