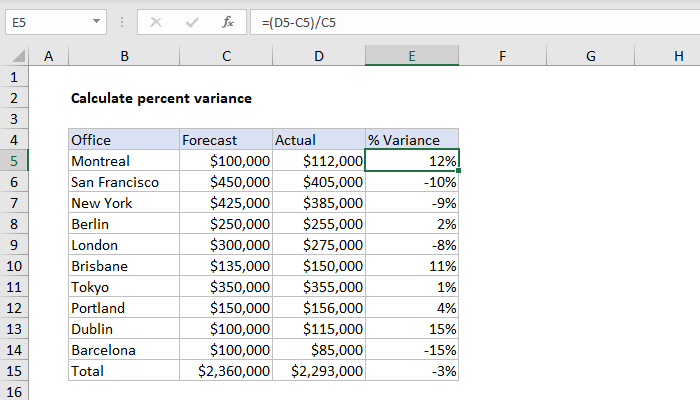 To calculate a percent variance, subtract the original (baseline) number from the new number, then divide that result by the original. In the example shown, the formula in E5, copied down, is:

The results in column E are decimal values with the percentage number format applied. The same formula can be used to calculate things like variance between this year and last year, variance between a budget and actual values, and so on.

In this example, the goal is to calculate the variance between a Forecast (column C) and Actual (column D) as a percentage. For example, with a Forecast value of 100,000 and an Actual value of 112,000, we want to return a variance of 12%.

After converting to an Excel formula with cell references, the formula in E5, copied down, is:

As the formula is copied down, it returns a decimal number for each item in the list. When these numbers are formatted with the Percentage number format, they are displayed as percentages.

In mathematics, a percentage is a number expressed as a fraction of 100. For example, 25% is read as "Twenty-five percent" and is equivalent to 25/100 or 0.25. Accordingly, the values in column E are decimal values, with the Percentage number format applied. To convert these values to a whole number like 12, multiply by 100:

If you have a negative value for the original number, the above formula won't work and can be adjusted by adding the ABS function:

ABS stands for "absolute value", and it converts negative values to positive values. In this case, the ABS function ensures the original value is positive when the variance is calculated.

Note: be aware that results negative values can be misleading, as explained by Jon Acampora in his detailed article on the topic.

Get percent of year complete
The goal in this example is to return the amount of time completed in a year as a percentage value, based on any given date. In other words, when given the date July 1, 2021, the formula should return 50% since we are halfway* through the year. *By...

Get profit margin percentage
In this example, the goal is to calculate and display profit margin as a percentage for each of the items shown in the table. In other words, given a price of $5.00 and a cost of $4.00, we want to return a profit margin of 20%. Each item in the...

Forecast vs actual variance
This is a pretty standard use of the SUMIFS function. In this case, we need to sum amounts based on two criteria: type (forecast or actual) and group. To sum by type, the range/criteria pair is: type , G$4 where type is the named range D5:D14, and...
Related functions

How to use percentage formatting in Excel
In this video we show you how to use the Percentage number format.
Good links
Percentage change with negative numbers (excelcampus.com)

LOVE your site... wow... you have helped me quickly do a lot of things that would have taken me forever to figure out on my own. And I love that your search feature actually knows what I'm looking for... lol -Morgan