How to make dependent dropdown lists in Excel

Dropdown lists allow users select a value from a predefined list. This makes it easy for users to enter only data that meets requirements. Dropdown lists are implemented as special kind of data validation. The screen below shows a simple example. In column E, the choices are Complete, Pending, or Cancelled, and these values are pulled automatically from the range G5:G7:

Here are some examples:

These kind of lists are called dependent dropdowns, since the list depends on another value. They are created with data validation, using a custom formula based on the INDIRECT function and named ranges. This may sound complicated, but it is actually very simple, and a great example of how INDIRECT can be used.

Read on to see how to create dependent dropdown lists in Excel.

The data validation in column B uses this custom formula:

And the data validation in column C uses this custom formula:

Where the worksheet contains the following named ranges:

The key to this technique is named ranges + the INDIRECT function. INDIRECT accepts text values and tries to evaluate them as cell references. For example, INDIRECT will take the text "A1" and turn it into an actual reference:

Similarly, INDIRECT will convert the text "A1:A10" into the range A1:A10 inside another function:

At first glance, you might find this construction annoying, or even pointless. Why complicate a nice simple formula with INDIRECT?

Rest assured, there is method to the madness :)

The beauty of INDIRECT is that it lets you use text exactly like a cell reference. This provides two key benefits:

In the example on this page, we're combining the latter idea with named ranges to build dependent dropdown lists. INDIRECT maps text to a named range, which is then resolved to a valid reference. So, in this example, we're picking up the text values in column B, and using INDIRECT to convert them to cell references by matching existing named ranges, like this:

How to set up dependent dropdown lists

This section describes how to set up the dependent dropdown lists shown in the example.

1. Create the lists you need. In the example, create a list of fruits, nuts, and vegetables in a worksheet. 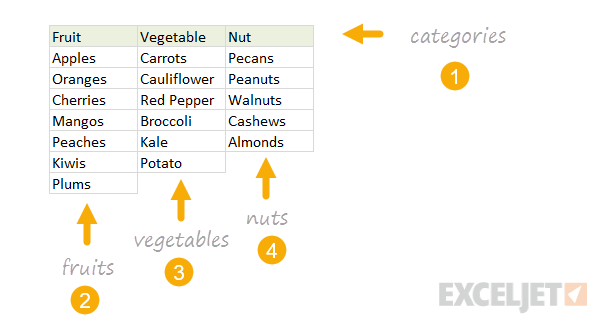 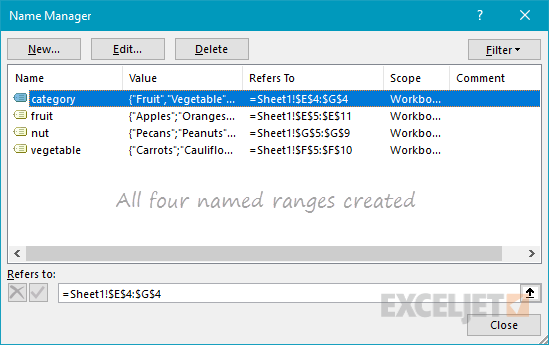 Important: the column headings in E4, F4, and G4 must match the last three named ranges above ("vegetable", "nut", and "fruit"). In other words, you must make sure that the named ranges you created match the values in the Category dropdown list.

3. Create and test a data validation rule to provide a dropdown list for Category using the following custom formula: 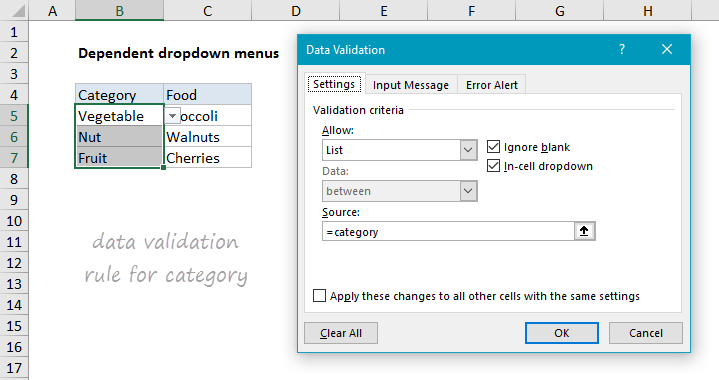 Note: just to be clear, the named range "category" is used for readability and convenience only – using a named range here is not required. Also note data validation with a list works fine with both horizontal and vertical ranges – both will be presented as a vertical dropdown menu.

4. Create a data validation rule for the dependent dropdown list with a custom formula based on the INDIRECT function: 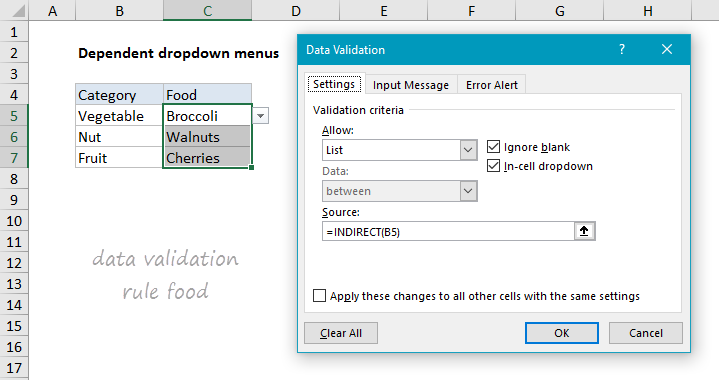 In this formula, INDIRECT simply evaluates values in column B as references, which links them to the named ranges previously defined.

5. Test the dropdown lists to make sure they dynamically respond to values in column B. 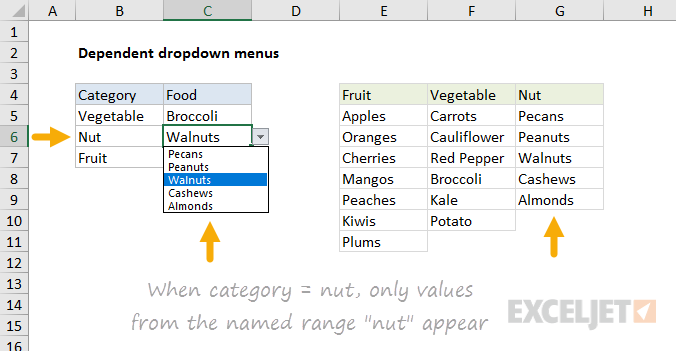 Note: the approach we are taking here is not case-sensitive. The named range is called "nut" and the value in B6 is "Nut" but the INDIRECT function correctly resolves to the named range, even though case differs.

Named ranges don't allow spaces, so the usual convention is to use underscore characters instead. So, for example, if you want to create a named range for ice cream, you would use ice_cream. This works fine, but dependent dropdown lists will break if they try to map "ice cream" to "ice_cream". To fix this problem you can use a more robust custom formula for data validation:

This formula still uses INDIRECT to link the text value in A1 to a named range, but before INDIRECT runs, the SUBSTITUTE function replaces all spaces with underscores. If the text contains no spaces, SUBSTITUTE has no effect.

The example file is attached below – check it out to see how it works. If you want to learn the technique yourself, I'd recommend you build a file of your own. The best way to learn is by doing.