How to use Mac function keys with Excel

If you want to master Excel keyboard shortcuts on a Mac, you need to take a moment to understand how the Mac keyboard is arranged, and how it can be configured through system preferences. This is especially important with Excel, which uses a number of function keys for shortcuts.

Modern Mac computers using an Apple keyboard have icons printed on some of the keys on the top row of the keyboard. These keys (F1 - F12) are called function keys.

On a Mac, function keys can be used in two ways:

(1) to perform special actions that correspond to the icon printed on the key, such as dimming or brightening the screen, showing the Dashboard, increasing or decreasing speaker volume, and so on.

(2) as standard function keys. In this case, the action performed will vary depending on (a) the application you are currently using or (b) the keyboard shortcuts listed in the Keyboard & Mouse pane of System Preferences.

The default behavior of Mac function keys is to perform the action indicated by the icon printed on the key. For example, the function key F10 has a small picture of a speaker, and pressing this key mutes and un-mutes the system volume.

If you want to instead use F1 - F12 as standard function keys, hold the Fn key while pressing the function key. For example, Fn-F10 will perform the action assigned to the F10 key instead of toggling mute on or off.

A setting in System Preferences, in the Keyboard pane, controls default behavior for function keys. 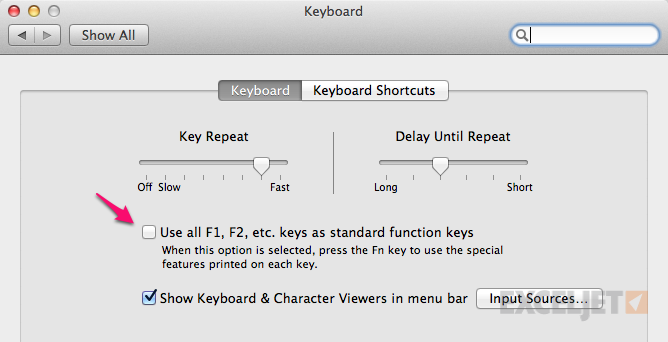 The setting is a checkbox labeled "Use all F1, F2, etc. keys as standard function keys unchecked". When unchecked, function keys will perform as described in #1 above.

If you check the checkbox, F1 - F12 will behave standard function keys, and you will need to press Fn in order to perform the actions indicated by special icons.

In general, unless you are using Excel all day on a Mac, you will probably find it more convenient to leave the default behavior alone and learn to use the Fn key for certain shortcuts in Excel. This is because it's nice to be able to access the Mac dashboard, brightness, and volume without having to press Fn at the same time.

You can change the keyboard shortcuts that are assigned to function keys in the Keyboard Shortcuts pane. For example, you could un-assign F9 from Mission Control so that F9 can be available in other applications. 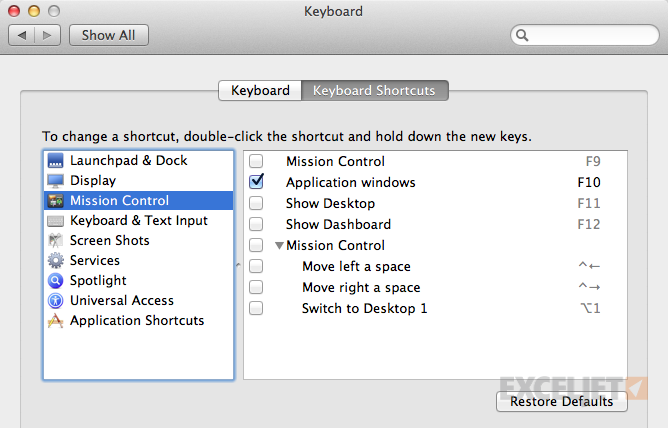 Your website saved my life! I have an ICT practical test tomorrow and I still don't understand some of the functions but your videos helped a lot! Thank you so much. -Maryam