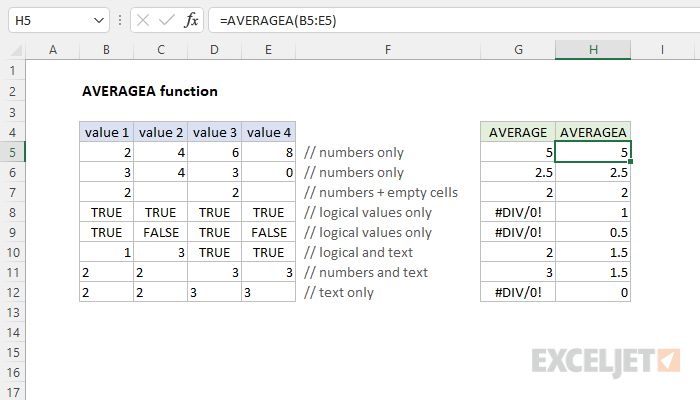 The Excel AVERAGEA function returns the average of a set of supplied values. Unlike AVERAGE, AVERAGEA will also evaluate the logical values TRUE and FALSE, and numbers represented as text, whereas AVERAGE ignores these values during calculation

Get the average of a group of numbers and text

A number representing the average.

The AVERAGEA function returns the average of a set of supplied values. AVERAGEA will include the logical values TRUE and FALSE, and numbers represented as text in the calculation. The AVERAGE function ignores these values during calculation

AVERAGEA takes multiple arguments in the form of value1, value2, value3, etc. up to 255 total. Arguments can include numbers, cell references, ranges, arrays, and constants. Empty cells are ignored, but zero (0) values are included.

To average values in the range A1:A10, including logical the logical values TRUE (1) and FALSE (0) and numbers entered as text, use AVERAGEA like this:

One confusing aspect of the AVERAGE function compared to the AVERAGEA function is that both functions will evaluate logicals and numbers entered as text when they are hardcoded as constants in a formula:

However, the AVERAGE function will ignore logicals or numbers entered as text when they appear in cell references. You can see this behavior in the worksheet example shown above.

Thank you so much for your universal formula on the page "Rank with ordinal suffix." It was exactly what I needed.
Grateful reader
END_OF_DOCUMENT_TOKEN_TO_BE_REPLACED