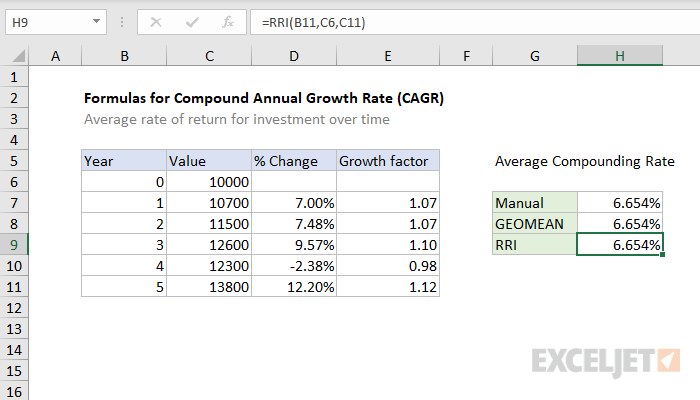 There are several ways to calculate CAGR in Excel. In Excel 2013 and later, the simplest way is to use the RRI function. In the example shown, the formula in H9 is:

CAGR with the RRI function

In Excel 2013 and later, you can use the RRI function to calculate CAGR with a simple formula. The formula in H9 is:

where C11 is the ending value in year 5, C6 is the starting value (initial investment), and B11 is the total number of periods.

Note: unlike most other financial functions in Excel, fv (future value, the third argument) does not need to be entered as a negative number in RRI.

CAGR with a manual formula

The formula for calculating CAGR manually is:

In the example shown, the formula in H7 is:

where C11 is the ending value in year 5, C6 is the starting value or initial investment, and B11 is the total number of periods.

CAGR with the GEOMEAN function

The GEOMEAN function calculates geometric mean, and can also be used to calculate CAGR. To calculate CAGR with GEOMEAN, we need to use relative changes (percentage change + 1), sometimes called a growth factor. We have these values already in column E so we can use them directly in GEOMEAN the function. The formula in H8 is:

Dave, you are an excellent teacher. I've learned so much from your videos (I'm a visual learner), and I appreciate that you provide the text/script for learners who learn best by reading. Your instructions are "pithy"/concise and the length of each video is about all I can absorb at one sitting (depending on the complexity)
Carol
END_OF_DOCUMENT_TOKEN_TO_BE_REPLACED