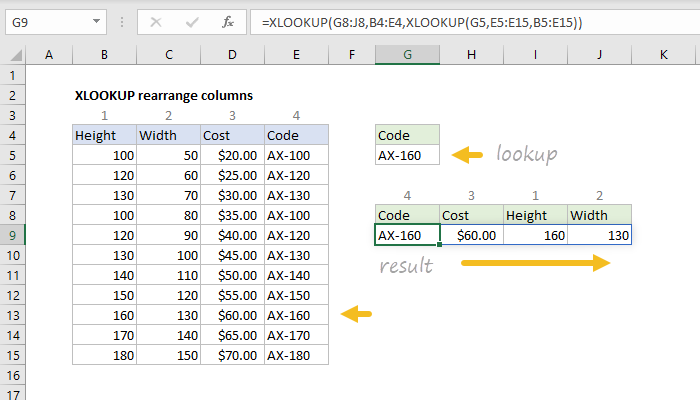 XLOOKUP can be used to reorder columns, by nesting one XLOOKUP inside another. In the example shown, The formula in G9 is:

Which returns a match on the value in G5, with all 4 fields in a different sequence.

This formula uses XLOOKUP twice, by nesting one XLOOKUP inside another. The first (inner) XLOOKUP is used to perform an exact match lookup on the value in G5:

The result is a match on "AX-160", returned as an array of all four fields in the original order:

This result is delivered directly to the second (outer) XLOOKUP as the return array argument. The lookup value is provided as a range representing the new order of fields, and the lookup array is the range containing the original field name order.

This is the tricky bit. We are passing in multiple lookup values, so XLOOKUP internally will calculate multiple match positions. For each value in the new field order range, XLOOKUP will find a position inside the old field order range and use this position to fetch a value from the return array (the values returned by the first XLOOKUP function). The result is the original lookup result with fields arranged in the new order.

XLOOKUP two-way exact match
One of XLOOKUP's features is the ability to lookup and return an entire row or column. This feature can be used to nest one XLOOKUP inside another to perform a two-way lookup. The inner XLOOKUP returns a result to the outer XLOOKUP, which returns a...
Related functions