Get days before a date 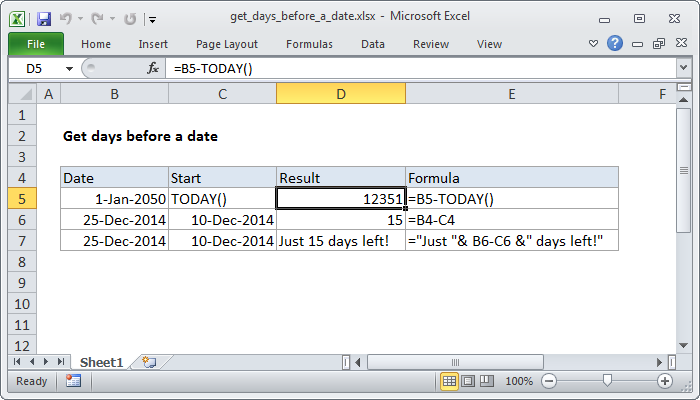 To calculate the number of days before a certain date, you can use subtraction and the TODAY function. In the example, D5 contains this formula:

Note: you don't need to use the TODAY function. In the second example, the formula in D6 is:

In the third example, the same basic formula is used along with concatenation operator (&) to embed the calculated days in a simple text message:

To calculate workdays between dates, you can use the NETWORKDAYS function as explained here.

Calculate expiration date
In Excel, dates are simply serial numbers. In the standard date system for windows, based on the year 1900, where January 1, 1900 is the number 1. This means that January 1, 2050 is the serial number 54,789. If you are calculating a date n days in...

Get workdays between dates
The Excel NETWORKDAYS function calculates the number of working days between two dates. NETWORKDAYS automatically excludes weekends (Saturday and Sunday) and can optionally exclude a list of holidays supplied as dates. For example, in the screenshot...
Related functions

The Excel TODAY function returns the current date, updated continuously when a worksheet is changed or opened. The TODAY function takes no arguments. You can format the value returned by TODAY with a date number...