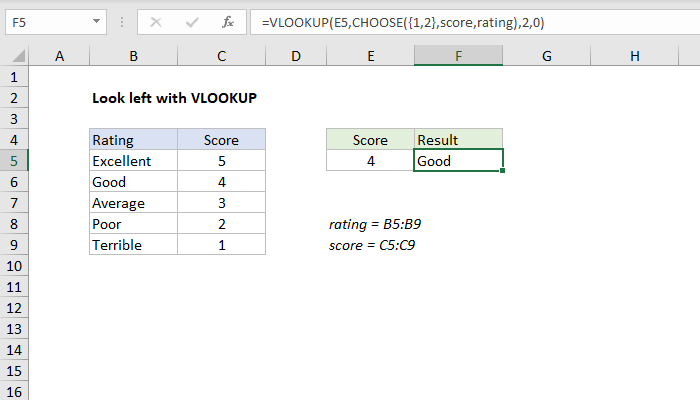 To use VLOOKUP to perform a lookup to the left, you can use the CHOOSE function to reorder the lookup table. In the example shown, the formula in F5 is:

One of the VLOOKUP function's key limitations is that it can only lookup values to the right. In other words, the column that contains lookup values must sit the the left of the values you want to retrieve with VLOOKUP. There is no way to override this behavior since it is hardwired into the function. As a result, with normal configuration, is no way to use VLOOKUP to lookup a rating in column B based on a score in column C.

One workaround is to restructure the lookup table itself, and move the lookup column to the left of lookup value(s). That's the approach taken in this example, which uses the CHOOSE function reverse rating and score like this:

Normally, CHOOSE is used with a single index number as the first argument, and remaining arguments are the values to choose from. However, here we give choose an array constant for index number containing two numbers: {1,2}. Essentially, we are asking choose for both the first and second values.

The values are provided as the two named ranges in the example: score and rating. Notice however that we are providing these ranges in reversed order. The CHOOSE function selects both ranges in the order provided and returns the result as a single array like this:

CHOOSE returns this array directly to VLOOKUP as the table array argument. In other words, CHOOSE is delivering a lookup table like this to VLOOKUP:

Using the lookup value in E5, VLOOKUP locates a match inside the newly created table, and returns a result from the second column.

Reordering with the array constant

In the example shown, we are reordering the lookup table by reversing "rating" and "score" inside the chose function. However, we could instead use the array constant to reorder like this:

The result is exactly the same.

With INDEX and MATCH

While the above example works fine, it isn't ideal. For one thing, most average users won't understand how the formula works. A more natural solution is INDEX and MATCH. Here is the equivalent formula:

In fact, this is a good example of how INDEX and MATCH is more flexible than VLOOKUP.

Dynamic lookup table with INDIRECT
To allow a dynamic lookup table, you can use the INDIRECT function with named ranges inside of VLOOKUP. In the example shown the formula in G5 is: = VLOOKUP ( F5 , INDIRECT ( E5 ), 2 , 0 ) Background The purpose of this formula is to allow an easy...

The Excel CHOOSE function returns a value from a list using a given position or index. For example, CHOOSE(2,"red","blue","green") returns "blue", since blue is the 2nd value listed after the index number. The values provided to CHOOSE can...

I'd just like to say thanks for being such a handy resource for Excel help over the last decade. Your videos and articles are so much easier to understand than everything else and the site looks great! I've been using the website for years to help with my study and yours is the best resource I've come across so far thanks to being so straightforward. -Fred