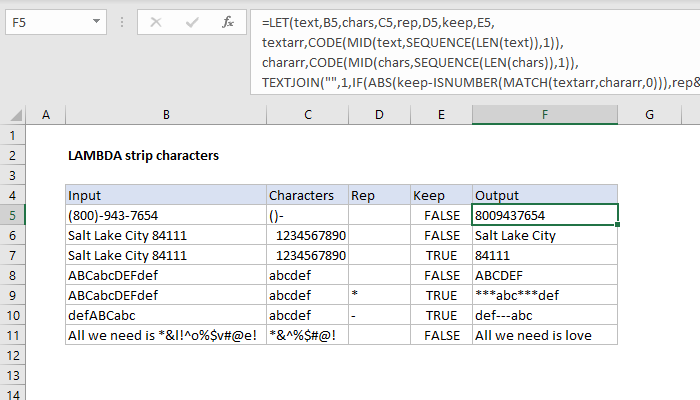 This is an experimental formula to strip characters from text using a formula created with the LET and LAMBDA functions. In the example shown, the formula in F5, copied down, is:

Unlike the formula explained here, this formula is not recursive.

The keep parameter is a boolean that "flips" the behavior of the function from stripping characters to preserving characters.

In a nutshell, the SEQUENCE function is used to generate two arrays: one for the text, one for chars. In order to make the function case-sensitive, these arrays are composed not of characters but of the ASCII codes for each character.

The MID function extracts one character at a time, and CODE returns the numeric code. Inside the IF function, the logical test is:

The ISNUMBER and MATCH combo checks each code in textarr against codes in chararr. The ABS function is used as a way to reverse the logic of the formula. If keep is set to FALSE or zero, the ISNUMBER+MATCH logic is unchanged and chars are stripped. If keep is TRUE (or 1) the logic is reversed – chars are preserved and other characters are stripped.

To convert the formula to the LAMBDA function so that the formula can be named and reused throughout the workbook, the four input arguments are moved to the front, followed by the calculation, wrapped in LET:

After the LAMBDA function is named "StripCharacters" the function can be called like this:

Per the example shown, the text is in cell B5, the characters to strip are "()-", the replacement string is "", and preserve mode is set to FALSE.

Strip numeric characters from cell
Excel doesn't have a way to cast the letters in a text string to an array directly in a formula. As a workaround, this formula uses the MID function, with help from the ROW and INDIRECT functions to achieve the same result. The formula in C5, copied...
Related functions